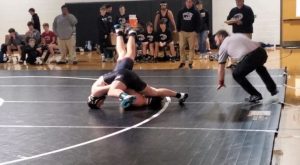 Congratulations to Javin Hackett for being named Athlete of the Week. This weekly award is sponsored by the Sports and Entertainment Marketing classes at Socastee High School in partnership with the athletic department.

Javin Hackett is a member of the wrestling team at Socastee and has been wrestling for 12 years. “My diet for wrestling includes normal food, but I do eat a lot of food, and something I want to work on improving is my stamina and strength,” explained Javin. Javin’s favorite wrestler is former Penn State wrestler, Bo Nikal, and someone who inspires him in the world of wrestling is Cael Sanderson, current head coach of the wrestling team at Penn State. “My favorite wrestling move is the cross body ride and something that makes me different from other wrestlers is that I don’t use shots,” said Javin.

Coach Gibbins is very proud of the season that Javin had for the Braves. “Javin finished 4th at the State Wrestling Tournament, had a 28-2 record, won the Lower State Championship, and won the Horry County Championship,” Coach Gibbins stated.