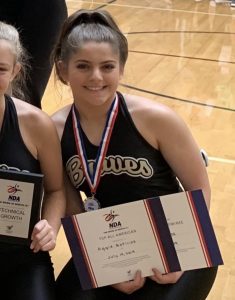 Congratulations to Aggie Bofilios for being named Athlete of the Week. This weekly award is sponsored by the Sports and Entertainment Marketing classes at Socastee High School in partnership with the athletic department.

Aggie is a senior and dances for the Bravettes. She has been dancing for 15 years and has been a member of the Bravettes for the last 3 years. “My favorite style of dance is hip hop and my favorite part of Bravettes is getting to perform for people,” Aggie said. As a leader for the Bravettes, Aggie has to do her part of helping keep the rest of the team motivated and organized. Travis Wall is a dancing role model for Aggie and when she is not busy dancing, she also plays guitar. “I hope to continue dancing in college through the Disney College Program,” Aggie stated.

Coach Karnes made the following remarks about Aggie: “Aggie is one of the many girls on the team that consistently captivates the audience when she dances. This is absolutely due to her work ethic at practices. Aggie always gives each run through everything she’s got and practices the way she wishes to perform. The team is very fortunate to have such an amazing dancer.”

No Events This Week

Events are added by athletic staff.
View All Events