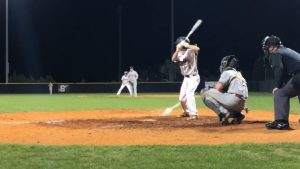 Congratulations to Cooper Bryson for being named Athlete of the Week. The Sports and Entertainment Marketing classes at Socastee High School in partnership with the athletic department sponsor this weekly award.

Cooper is a junior on the varsity baseball team and plays shortstop for the Braves. He says he has been playing the game for as long as he can remember. “I can’t pick just one thing to be my favorite, I love everything about baseball from practices to games,” he explained. Cooper has been a key player in the middle of the field for the Braves the last two seasons and has made a lot of great defensive plays for the team. “I like playing for Socastee because I get a chance to compete alongside all of my friends that I grew up playing baseball with,” he said. Cooper says he does not have a role model in the baseball world he tries to model his game after, but instead just tries to be the best version of himself. This mindset has worked well for him so far, and it will be exciting to see him lead the Braves next season for his senior year.

Coach Hudson said the following about Cooper: “Cooper always plays hard and is a very teachable and coach-able young man.”

No Events This Week

Events are added by athletic staff.
View All Events